The Wonders of Turmeric

In the words of David Frawley: “If I had only a single herb to depend upon for all possible health and dietary needs, I would without much hesitation choose the Indian spice turmeric.”

Turmeric has been worshipped and revered by people for centuries, and still today it is one of the most significant players in the prevention of disease as well as the general afflictions caused by modern day living. The most well-known medicinal action of turmeric is its use as a powerful anti-inflammatory. However, it also acts as a painkiller, antibacterial, anti-tumour, anti-carcinogenic, anti-allergic, anti-oxidant, antiseptic, liver stimulant, digestive & diuretic.

On a day to day basis turmeric can be taken by all to maintain health. It boosts the integrity of the digestive and immune systems. It helps keep the internal bacteria and flora in our intestine in balance to give efficient digestion. Turmeric also protects the liver from toxins and pathogens, everything from alcohol and drugs to the many surrounding environmental toxins. Its stimulating effect on the liver helps purify the blood, regulate hormones and improve skin quality and appearance. Also by simulating bile flow it also helps in the metabolism of fat.

For those interested in yoga and sport turmeric benefits the joints by keeping tendons and ligaments strong and free from injury, it also minimizes pain and inflammation related to any kind of strenuous activity or trauma. So whether suffering from an acute or chronic disease, aches and pains, bumps and bruises, or as preventative maintenance, turmeric can and should be utilized by everyone on a regular basis.

Scientists are beginning to realize the importance of turmeric in treating modern disease. Much research has been conducted on the various effects of ‘curcumin’ which is the active part of turmeric; the most widely researched is that of its effects on Cancer.  “We have not found a single cancer on which curcumin does not work”, states Dr. Bharat.  Much more research is underway to prove scientifically what the ancient people of India have known for centuries: that turmeric is one of the most powerful plants on the planet. Whenever taking turmeric we should also take a little black pepper, which increases the bioavailability of curcumin, the active ingredient in turmeric. 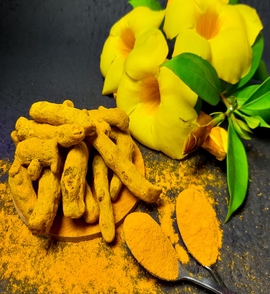